What Can Be Predicted About Channel 9's Sixty Minutes Team's Outcomes in Lebanon? 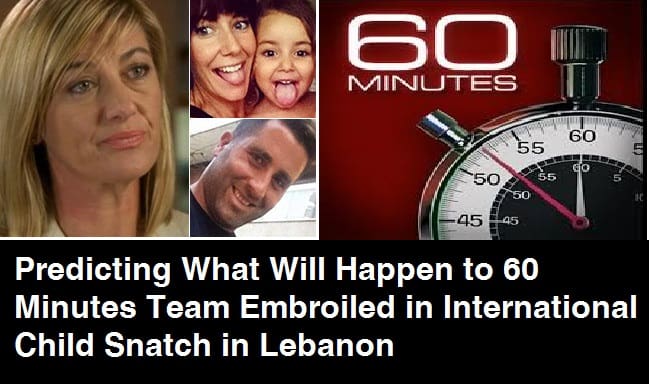 Here in Australia, media outlets are understandably going into overdrive in terms of their reporting the fate of news media icon, Tara Brown.

Brown and her team including her producer and camera crew have been detained in Lebanon as a result of their alleged involvement in the clandestine snatching of children with Australian/Lebanese heritage who are living with their Father in Lebanon.

By comparison to Brown’s well recognised and attractive features, which are front and centre in the media, a somewhat grainy black and white clip depicts the clearly violent and confrontational episode which was the children’s reality at the time when their carers (apparently a nanny and their Grandmother) were assaulted as a part of the efforts of the Australian group.

Whilst Brown and her team are in custody, and Australian consular officials are ensuring they receive assistance, we are all a bit in the dark and left wondering about what might happen to those involved.

The public has been informed (and this started with an earlier news article in the Australian media) that the children were in Lebanon as part of a holiday with their father and were not returned to Australia as their Australian mother had expected.

No doubt, a family law dispute exists between the mother and the father, in terms of who should be exercising rights of custody and access in respect of the children and also where the children should live.

That is the base factual and legal dispute.

They neither deserved, nor invited, any violence to come into their lives.

Each of Australia and Lebanon have family law-related legislation and Courts.

It was an option open to each parent to bring proceedings in those Courts, engage lawyers and ask a Court to determine what parenting arrangement (and place of residence) is in the children’s best interests.

We do not live in a society (and neither do people in Lebanon) where child snatching can or should give effect to decisive custodial parenting arrangements.

Further, when parents have children, they typically choose their partner, such that when we choose a partner, consideration is given to their cultural background and it can easily be an identifiable problem that if one spouse is from a religion-dominated culture different from your own, early consideration should be given to the differences in backgrounds to ensure compatibility before children come along or are considered.

In the present case, two children were permitted to be removed from Australia with the Mother’s consent.

If something has gone wrong, then taking the matter into your own hands is bound to cause problems, including these playing out for both the Mother and the journalistic team as well as the mercenaries engaged to do the dirty-work.

In our experience, news programs such as Sixty Minutes enter agreements with informants or persons participating in stories, offering them financial rewards/compensation for participating as well as generous coverage for legal resources in the event that any legal issues arise from the story, for example, defamation.

Of concern would be the notion that any Judge or Court is going to look at this situation and immediately identify the likelihood that the Mother and the Sixty Minutes crew have caused the entire situation by travelling to the Country, stalking the children and plotting their removal back to Australia including by whatever means necessary. In the current media reports, it appears the incident involved violence and that the violence happened to women and in the presence of children.

If the situation had been limited to the Mother seeing the children in the street, then perhaps no harm would have been done, however, what can be seen and inferred is that there has been quite a violent episode in the streets of Lebanon, where the laws of that Country apply.

The images depict a breach of those laws – and those laws are Sovereign and clearly applicable to Brown and her crew whilst visiting that Country.

The bigger question however, will be who knew what and who was engaged by who, going into the foray into Lebanon.

If Brown and her crew are proven to have sourced, engaged and paid the mercenaries/agents who conducted the snatch, then why shouldn’t the instructors (if that be the Ch 9 staff) be vicariously and criminally responsible for the actions of those they engaged – particularly as it is reasonably foreseeable that a person caring for children will not relinquish them without the need to resort to violence.

We believe that the current situation will not go well for the crew or the Mother.

In the current scenario, it has been alleged that Brown and her crew have been caught with incriminating evidence, being their footage and partly completed story.

It would be surprising that this is not very incriminating evidence of a conspiracy to break the laws applicable in Lebanon regardless of the consequences.

We feel that there are dark days ahead….all of which could have been avoided by the Mother seeking out appropriate family law advice and carefully considering the consequences of allowing children to travel to Countries who are not participating in appropriate Hague Convention Civil Aspects of Child Abduction arrangements.

It will not surprise us if the relevant participants are not released and face a formal trial and sentence as a result of their choices.

Whilst expensive and perhaps an affront to right thinking parents who would expect their children to return from arranged holidays, it would have been significantly more palatable to bring proceedings than be languising in custody, where there is limited scope at all to either parent or interact with the Mother’s children and the children of the news crew back here in Australia.

We do hope for a positive outcome, and for the prompt release and return of the crew to Australia.

With 20:20 hindsight, and the benefit of competent family law legal advice, those children would have been unlikely to have been permitted to travel to Lebanon given the risk of them not returning – something which has now come to fruition.

If you or someone you know is considering releasing children for overseas travel to a Country which does not participate in international child abduction convention arrangements, obtain or refer them for advice and encourage them to reconsider. Likewise, where Department of Foreign Affairs and Trade travel advisory warnings are in place, legal advice can be taken to seek to prevent travel to those risky areas.

Our lawyers are familiar with the Countries who have signed up and can access DFAT travel advisory warnings in order to give concise advice.

If consulted to advise concerning a child snatch in a non-convention Country, serious warnings would need to be provided about the risk of being apprehended and jailed in that Country and that those risks apply to the parent seeking to recover the children and all others involved or paying the funds forward for the recovery.

Overall, it seems that the risk to liberty was too great to have taken here and also that this has been an arrangement which has perhaps overstepped the mark involving “making the news” as opposed to “reporting it.”